Ahhh, Pride and Prejudice by the amazing Jane Austen. One of my all-time favorite books. A Wicker book, as a few of us friends now call it.  (It seems that the husband of a dear friend – you know who you are – thinks that all such Jane Austen-ish movies and books feature the same type of women conversing while sitting on wicker furniture. Only the backgrounds need change. Thus the World of Wicker came to be.)

Despite such ribbing, I shamelessly hold this story dear to my heart. If only I could tell Jane Austen herself how much I like it. How much the world has embraced and revered it.

…But wait. What am I hearing? It almost sounds like Miss Austen herself.

Rolling in her grave.

Uh oh. I think she may have caught wind of the latest “tribute” to her work. Brace yourself to meet… Pride and Prejudice and Zombies.

Yes, you heard me. …aaaand Zombies. Have you heard of this? I wouldn’t be surprised if you have. The 2009 novel battled its way to a spot on the New York Times’ Bestseller List, and even a movie is in the works.

But what is it?  Elizabeth Bennett, meet Zena, Warrior Princess. Or something like that. 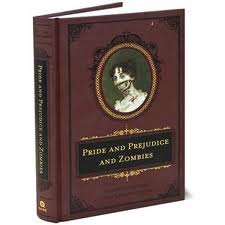 The original P&P text is there, but with…um, enhancements.  Now instead of only fighting the social quandaries of her day, Elizabeth and the gang hone their skills in fierce battle with zombies.  People are prized for their prowess in combat, not just for bowing and curtsying at balls. Warriors yearn for practice time between social engagements to spar and improve their zombie killing.

So, given that, what do you think? Is this a travesty against one of the greatest novels of all time? Against Miss Austen herself?  Or, does the spotlight shone on P&P&Z usher her back into the limelight for new readers to admire?

As for me, I have to admit that my heart warmed to hear David say, after reading P&P&Z, that he wanted to watch the mini-series again. Hmm…that can’t be all bad for Alison.  And I have to remember that Jane Austen sported a sharp sense of humor and didn’t take herself too seriously.

Perhaps that rolling in the grave we hear isn’t from her horror, but from her rolling with laughter.