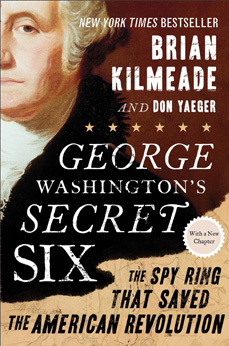 What it’s about: This non-fiction bestseller offers its account of the true-to-life Culper spy ring. General Washington needed crucial intelligence about the King’s army during the American Revolution. The authors walk–at times gallop–the reader through the enlistment of the ring, including spymaster Benjamin Tallmadge. Tallmadge and the spy ring handpick unlikely spies from the sleepy villages of Long Island to the heart of the British stronghold of Manhattan itself. Their collective covert work helps turn the tide of the revolution; the title doesn’t lie.

What I liked: Off the bat, the reader understands that the authors researched the stories to the nth degree. That helps the reader settle back and enjoy the read. True, even history can be vulnerable to the storytelling itch of authors, but the reader finds admissions of historical uncertainties when the authors can’t claim something as gospel.

That said, the story of the Culper ring fascinates those even remotely familiar with the American Revolution. We learn of heroes like Abraham Woodhull and Robert Townsend (Culper Sr. and Culper Jr., respectively), who risked and suffered in the shadows to fulfill their missions. We see a faint verbal portrait of the anonymous Agent 355, a female spy who acted with courage in the face of the horrors of war. It’s an insider’s view of the revolution that gives more life and dimension than we all had time to learn in school.

I’m not crazy about: In our secret schools for writers (okay, they’re not so secret), there’s a certain way to write non-fiction/history in long form, like this book. You’ve gotta make it read like a novel. We’re taught to take the elements of fiction storytelling and apply it this scenario: characterization, setting, plot, theme, etc. Tell the truth, but make it an interesting read. Shhh, don’t tell or they’ll kick me out of the writers’ schools. The authors did this well, overall. However, a spot or two suffered from some forced tension that felt thin. …But not enough to prove traitorous.

The bottom line: “I’m telling you, you’ll love it.” I have a particular friend who shall, like Agent 355, remain nameless. Whenever I recommend a movie, she narrows her eyes and shoots me a sideways look and half-smile. I lost her confidence in my recommendations when I tried to sell her on Napoleon Dynamite and Nacho Libre. But let the record show: she liked Nacho Libre, and now she even likes my “usual” at our local coffee house.

So, if she is coming around to the genius of my tastes, I can say with conviction (I cannot tell a lie) that I think my fellow history-lovers will enjoy Secret Six.

What about you? Do you enjoy books like these? Do you think you would’ve stepped up to the plate as a Culper spy?